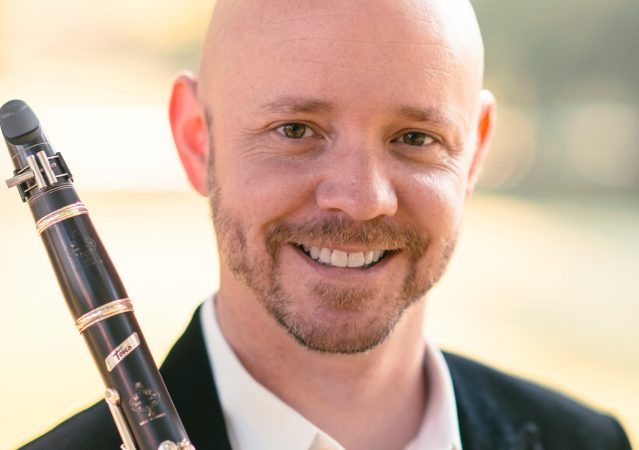 Shawn L. Copeland combines performance, pedagogy, and entrepreneurship as he navigates today’s dynamic music industry. He joined the faculty of the Lionel Hampton School of Music at the University of Idaho in 2014 where he teaches Clarinet, Alexander Technique, and Entrepreneurship and performs with the Northwest Wind Quintet and the Hammers & Reeds Trio. He is currently the principal clarinetist of the Washington/Idaho Symphony Orchestra, the Co-Director of the Stetson University Clarinet Clinic, resident Alexander Technique teacher for the Eastern Music Festival, and has held management positions with Walt Disney Entertainment, Inc., the Orlando Philharmonic Orchestra, and the Greensboro Opera Company.An advocate for new music and an avid chamber musician, he is a founding member of TOSCA Duo, Relevents Wind Quintet, and Hammers & Reeds Trio. Shawn believes strongly in the performer/composer collaboration; his on-going work with composer, Carlos Velez has resulted in a growing body of solo and chamber music for clarinet including three quartets, two duos, a sextet and a solo suite. He has premiered many of these at the International Clarinet Association’s ClarinetFests 2005, 2006, 2014 and will premiere Dark Matter (the third new commission of TOSCA Duo) at ClarinetFest 2016. He premiered Of a Song, a commission of Hammers & Reeds Trio at the 2015 International Double Reed Society Conference in Tokyo, Japan. He has performed at several Vandoren Ensemble Festivals, numerous regional Clarinet Festivals (Southern Mississippi, South Texas, Montana/Idaho, University of Alabama) and presented solo recitals throughout the United States, Ireland, Germany, and Mexico. Shawn has two current recording projects with TOSCA Duo which will be completed in the summer of 2016. The first is the debut CD for the duo and the second is a trio project for works for two clarinets (or bass clarinet) and piano. Shawn can also be heard on Arts for Life and From the Barrio to the Concert Hall, both with Relevants Wind Quintet and on aurora!, ra!, and sunrise! with the University of North Carolina at Greensboro Wind Ensemble. Equally at home on all members of the clarinet family, he has served as the e-flat/bass clarinetist with the Greensboro Symphony Orchestra, e-flat clarinetist with the Winston-Salem Symphony, principal clarinetist of the Fibonacci Chamber Orchestra and the Novus Chamber Ensemble, co-principal of Southern Winds, and performed with the North Carolina Symphony, the Fayetteville Symphony Orchestra, the Orlando Philharmonic Orchestra, and the Bach Festival Orchestra of Winter Park, FL. Dr. Copeland is a sought after clinician. As a pedagogue, he is passionate about holistic teaching and the inclusion of the body in the creative process. Shawn is an accredited teacher of Alexander Technique and a specialist in Body Mapping and has dedicated his research to working with performing artists. He is the author of the upcoming publication, What Every Clarinetist Needs to Know about the Body. He has helped hundreds of musicians understand the nature of and recover from their performance related injuries. Shawn travels extensively giving presentations, master classes, workshops and lessons at universities and music/clarinet specific conferences throughout the country. He recently presented a four part series on Body Mapping for Clarinetists as part of the wellness division of the Texas Clarinet Colloquium 2015 and has presented at ClarinetFest 2014 and the upcoming 2016 conference. He has built two programs of collegiate study in the Alexander Technique, first at the University of North Carolina at Greensboro School of Performing Arts, and now at the University of Idaho. He spends his summers teaching at the Stetson University Summer Clarinet Clinic, the Eastern Music Festival, and Freedom and Ease of Movement, an Alexander Technique residential workshop for performers in Spokane, Washington.Recognizing that survival in today’s music industry requires more than excellent performance skills, Shawn blends his entrepreneurial background with his studio and classroom teaching. Shawn completed a Master of Arts degree specializing in Non-Profit Management at the University of Central Florida during a time when performing arts management degrees were just beginning to develop. He was able to learn essential marketing and fund-raising skills that were immediately implemented during his time in Talent Casting at Walt Disney Entertainment, his internship with the Orlando Philharmonic Orchestra, the Director of the Community Music School at the University of North Carolina at Greensboro, and as Director of Development for the Greensboro Opera Company. He teaches the capstone course in entrepreneurship for the Music Business degree at the Lionel Hampton School of Music at the University of Idaho, and consulted and taught Career Development at the University of North Carolina at Greensboro from 2002-2014.Dr. Copeland earned the Doctorate of Musical Arts degree from University of North Carolina at Greensboro. He holds additional degrees in music from the University of North Carolina at Greensboro (Master in Music) and Stetson University (Bachelor of Music), and in Non-Profit/Arts Management (Master of Arts) from the University of Central Florida. He is a Certified Teaching Member of Alexander Technique International and a Licensed Andover Educator. His teachers include Kelly Burke, Lynn Musco and Frank Kowalsky. Shawn Copeland is a performing artist and clinician for Buffet Crampon USA. His instruments of choice are Buffet GreenLine Toscas with a vintage Kaspar Cicero 14 mouthpiece, refaced by Bradford Behn; R-13 E-flat, and Prestige Bass Clarinet. Dr. Copeland is a Gonzalez Reeds Artist, using Gonzalez Reeds exclusively for B-flat, E-flat and Bass clarinet