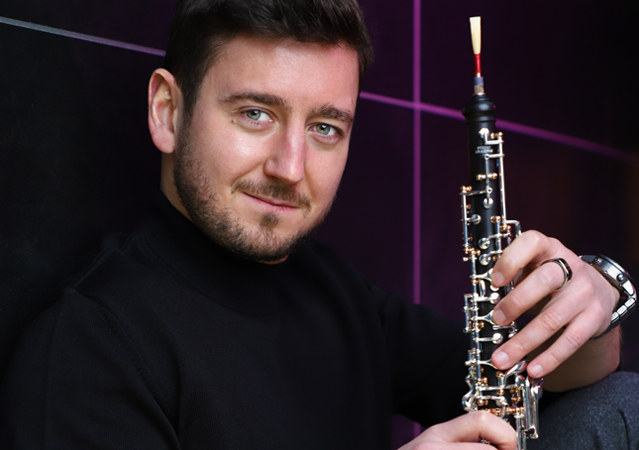 French oboist Philippe Tondre has secured a place among the finest musicians of his generation. «Master of the oboe » (Bonner General Anzeiger), his music-making is packed with emotional sensitivity and stunning virtuosity. The powerful expressiveness of his interpretations connects with all audiences and has brought him great critical acclaim :

« This young musician with his wonderful noble tone, much rounder and fuller than we are used to hearing, is simply amazing » Pamina Magazin Klassik

There have been several unforgettable events which have marked Philippe Tondre’s career. Undoubtedly one of his greatest moments was winning the ARD Music Competition as well as the Audience Prize and the prize for the best interpretation of Liza Lim’s commissioned composition in Munich in 2011. In 2012 Philippe Tondre received the « Beethoven Ring » a musical honour given by the Beethoven Fest in Bonn, thus joining the prestigious list of previous recipients including Julia Fischer, Lisa Batiashvili and Gustavo Dudamel. Philippe Tondre’s invitation to appear in the ARTE television Programme « Stars of Tomorrow », hosted by Rolando Villazon, was an exceptional and exciting moment.

His attachment to contemporary repertoire led to his highly acclaimed performance of the German Premiere of James MacMillan’s Oboe Concerto, conducted by the composer, accompanied by the SWR Stuttgart Radio Symphony orchestra, and the unforgettable Japanese Premiere of György Ligeti’s Double Concerto for Flute, Oboe and Orchestra, with Jacque Zoon (flute) and the Saito Kinen Orchestra conducted by Kazushi Ono.

As principal oboe, he plays with leading orchestras including the Royal Concertgebouw Amsterdam, the Paris Orchestra, the Zurich Opera and the Bavarian Radio Symphony Orchestra.

Born in Mulhouse France in 1989, Philippe played in the French National Youth Orchestra and the Gustav Mahler Youth Orchestra. After studying ten years with Yves Cautrès, he joined David Walter’s class at the Conservatoire National Supérieur de Musique de Paris and followed the teaching of masters such as Heinz Holliger, Maurice Bourgue, Nathalie Stutzmann, Jacques Tys, Jean-Louis Capezzali, Ingo Goritzki and Dominik Wollenweber. At the age of 18, while studying in Paris, he was appointed principal oboe of the South West Radio Symphony Orchestra Stuttgart.

In November 2015 Philippe Tondre was nominated Professor for Oboe at the Hochschule für Musik Saar. He gives masterclasses in China, Taiwan, Japan, Spain, Switzerland and Germany.

We are proud to welcome Philippe Tondre as he has joined the Buffet Crampon family in 2020.