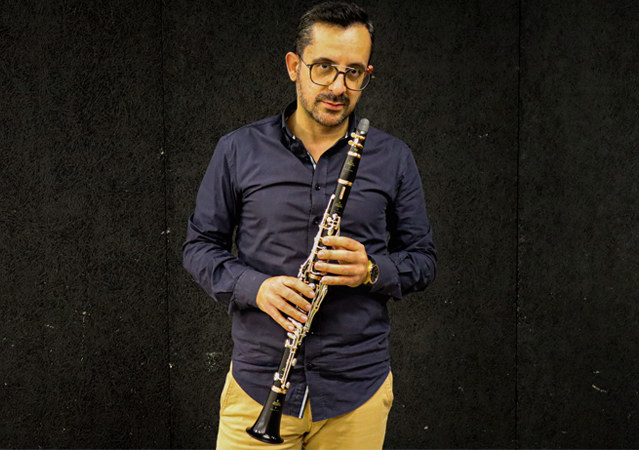 Born in Cabeceiras de Basto, he began his musical studies at the Banda Cabeceirense School. He studied at the Professional Art School of Vale do Ave – ARTAVE.

-Master in Musical Arts – Performance Soloist – by the Faculty of Social Sciences and Humanities of Universidade Nova de Lisboa.

He is regularly invited to host master classes and Orchestra Internships around the country, both as a clarinet teacher and as a Conductor. He was a guest judge of the International Clarinet Competition at Clarmmet 2017; he directed the closing concert of the Internacional Clarinet Festival in Lisbon at the Thalia Theater in 2019. He performed a recital at the Clarmmet in Porto 2021 where he premiered his work “M´inês”, for solo clarinet.

He is the Artistic Director of the Sintra Clarinet Festival.

As a clarinet player, he was a laureate in national and international competitions, including the first place in the Chamber Music competition at the OPEM 1999 in Castelo Branco and the Award for Best Interpreter of Contemporary Music in Porto 2001 – European Capital of Culture.

As a conductor, he won in 2016, the 6th Vila de Xira International Band Contest, obtaining the 2nd prize (without the 1st prize to be awarded), in the 2nd Category. In 2017, at the 4th International Band Competition – Filarmonia D’Ouro at Europarque de St Maria da Feira, he won 1st prize.

He was awarded a Commendation, Congratulation and Rejoice by the Municipality of Cabeceiras de Basto in 2016.

He is a sponsored Buffet Crampon and D’Addario artist.

Since April 2014, he has been the artistic director and conductor for the “Sociedade Filarmónica Comércio e Indústria da Amadora”.