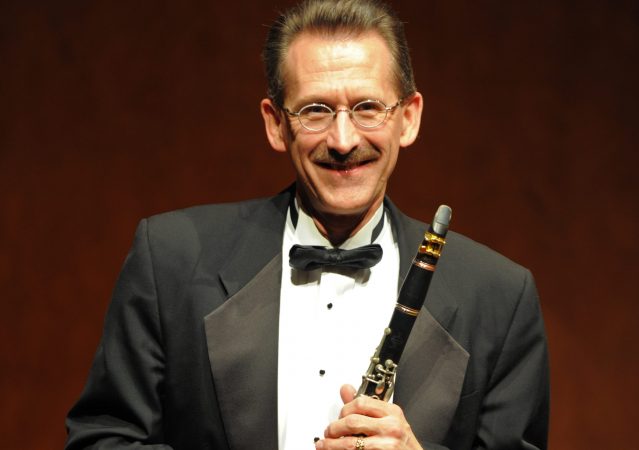 Gary Whitman is Professor of Clarinet and Division Chair of Woodwinds at Texas Christian University in Fort Worth, Texas. Active as a recitalist, he has performed at ClarinetFest conferences in Arizona, Oklahoma, Texas, Utah, Maryland, Missouri, California and Nebraska. His performances at international conferences include Paris, France, Ostend, Belgium, Stockholm, Sweden, Vancouver, BC, Canada, Porto, Portugal, and Assisi, Italy. He has presented masterclasses in Mexico City, Peru, Belgium, Puerto Rico and China. His chamber music affiliations include the Texas Clarinet Consort, and Trio Con Brio, a TCU faculty trio dedicated to performing and commissioning music for clarinet, viola, and piano. Trio Con Brio has presented 11 chamber music commissions in the past five years and released their debut CD on Albany Records, A Musical Celebration, featuring the music of Elena Sokolovski and Eric Ewazen. He has performed new works by Eric Ewazen in Weill Recital Hall at Carnegie Hall, Osvaldo Golijov and Sebastian Currier at the “Cliburn at the Modern” series in Fort Worth, and Till MacIvor Meyn in the Shanghai Concert Hall. In addition to his position at TCU, Mr. Whitman is the bass clarinetist of the Fort Worth Symphony, performing in the classical subscription series, “Pops”, and the Fort Worth Opera Festival at Bass Performance Hall. He holds the BME and MME degrees from the University of North Texas and was awarded the certificat de stage from the International Music Institute in Nice, France. In 2004, TCU conferred upon him the Dean’s Award for Research and Creativity and in 2009 the College of Fine Arts award for the Chancellor’s Distinguished Achievement as a Creative Teacher and Scholar. Past-President of the International Clarinet Association, Mr. Whitman is also an artist-clinician for Buffet Group USA, Inc. and Rico Reeds.