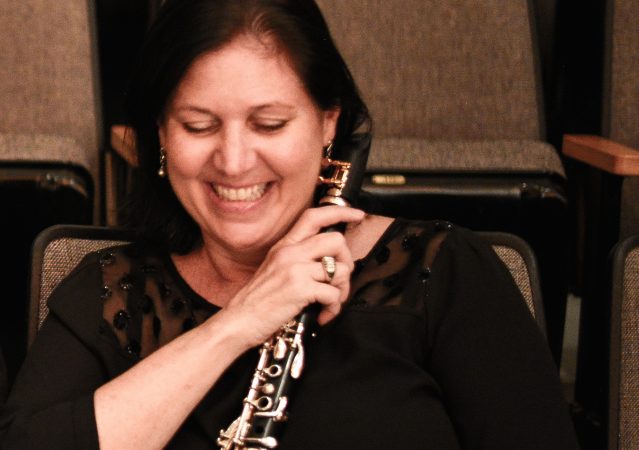 Margaret Donaghue Flavin has performed as chamber musician and soloist in more than a dozen countries across three continents. She has performed in major venues around the world, including Carnegie Hall, Symphony Space, the Concertgebouw, the Zurich Tonhalle, American Cathedral in Paris, St Martin-in-the-Fields, and The American Academy in Rome.Chamber music recital venues include Paris, London, Rome, Boston, New York City, Honolulu, and Grand Cayman, as well others across the US, Europe and Japan. Dr. Donaghue has appeared as soloist with the Shanghai Broadcast Symphony and the Shen Zhen Symphony, Shen Zhen, China, as well as the Russe State Philharmonic, Russe, Bulgaria.She has performed at international conferences in Oslo, Norway; Manchester, England; Assisi, Italy; Chicago, Los Angeles, St Louis, and New Orleans, among others. During a chamber music tour of Europe she performed the sextet L’Heure du Berger, with composer Jean Françaix at the piano.Dr. Donaghue performs as clarinetist with PULSE Trio, an exciting and versatile chamber group, along with Scott Flavin, violin and Naoko Takao, piano. She also plays recorders for the early music ensemble, Impulso Barroco, the Baroque counterpart of PULSE, committed to unique and engaging period performances. She is a founding member of MiamiClarinet and Miami Chamber Ensemble, and has performed across the United States and abroad with both ensembles.Along with her husband, violinist/conductor Scott Flavin, Maggie is co-founder and Executive Director of the Blue Ridge Chamber Music Festival. BRCMF is a two- week festival which takes place each June in Blue Ridge, Georgia.Dr. Donaghue is Professor of Clarinet and Director of the Woodwind Program atthe University of Miami Frost School of Music. Dr. Donaghue has recently served athree-year term as a member of the Fulbright National Screening Committee, and appearsfrequently as clinician and adjudicator.She received the Doctor or Musical Arts degree from the University of Illinois, the Master of Music degree from the University of Michigan, and holds a Bachelor of Music degree from the University of New Hampshire. Prior to coming to Miami, Dr. Donaghue served on the faculties of Central Michigan University and the University of Connecticut. She can be heard frequently on Public Radio, and has recorded for the Centaur, Albany, Altarus and Living Composers labels.