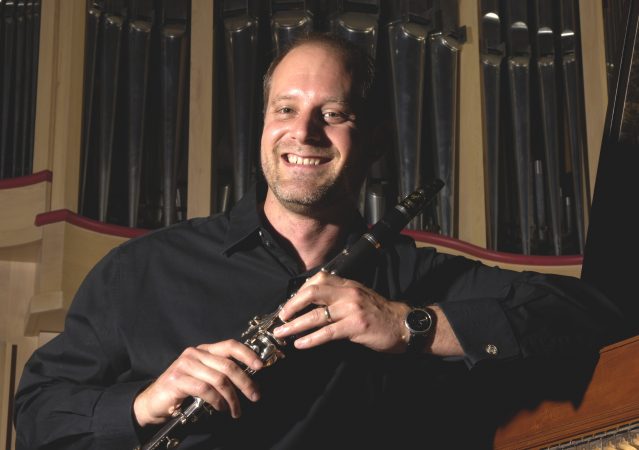 Clarinetist, Joseph Eller, was appointed as a member of the University of South Carolina School of Music faculty in 2005. He has performed solo and chamber music recitals throughout North and South America, Europe and Asia. Mr. Eller was appointed principal clarinetist of the South Carolina Philharmonic in 2012 and has played extra with the Atlanta Symphony Orchestra, the Atlanta Opera Orchestra, Charleston Symphony Orchestra and numerous other orchestras throughout the southeastern United States. Previously, he served as principal clarinetist of the Cobb Symphony Orchestra in Georgia from 1997-2005 and was the clarinet professor at Kennesaw State University from 1998-2005. Additionally, he was principal clarinetist of the 214th Army Band in Atlanta, GA from 1996-2000, where he was a featured soloist on many of their national tours. He has recorded on the Centaur, Mark, Vestige, Beauport Classical and Allgood record labels. A native of Ypsilanti, Michigan, Mr. Eller received performance degrees from Eastern Michigan University and Louisiana State University and began his doctoral studies at the Peabody Institute. The teachers with whom he has studied include Steven Cohen, D. Ray McClellan, Laura Ardan, Steven Barta, Dan Silver, Ted Oien and Armand Abramson. Mr. Eller was co-Host and co-Artistic Director of the 2006 International Clarinet Association convention, ClarinetFest® 2006, in Atlanta, GA. He is a member of Pi Kappa Lambda, the College Music Society and serves as the South Carolina State Chair of the International Clarinet Association. He plays on Buffet R13 clarinets, Rico Reserve mouthpieces and Rico Reserve Classic reeds and he is an artist/clinician for the Buffet Group, USA. His hobbies include playing ice hockey, racquetball, snow skiing, and reading. He, his wife Christie, and their sons, Nick and Alex live in Columbia, SC and are active members of First Presbyterian Church, Columbia.http://www.classicsonline.com/catalogue/product.aspx?pid=1553630 Joseph Eller’s solo CD “Bach in Time on the Clarinet” was released in 2012 on the Centaur recording label featuring his own arrangements of music by J.S. Bach performed with organ, harpsichord and continuo and soprano. http://www.classicsonline.com/catalogue/product.aspx?pid=1930897 “And I Await…” is the new CD featuring the USC Wind Ensemble performing live at the 2013 CBDNA convention which includes Joe Eller performing the clarinet concerto by Frank Ticheli.