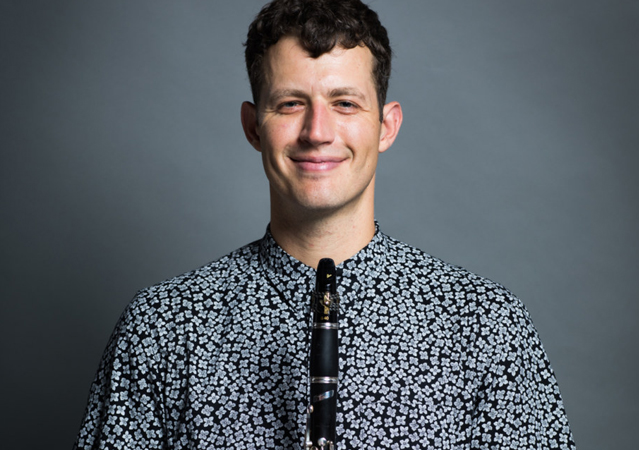 Gregory Agid is emerging as the preeminent jazz clarinetist of his generation. The New Orleans based multi-instrumentalist maintains an extremely active performance schedule playing both clarinet and saxophone with GRAMMY award-winning artist Michael Buble, Delfeayo Marsalis’ Uptown Jazz Orchestra, and his own Gregory Agid Quartet, with whom he has released three albums to date. Agid comes from a strong tradition of jazz excellence, education, and mentorship in New Orleans. As the protégée of clarinet guru Alvin Batiste, it is only natural that Agid has found great success and fulfillment as an educator. Alongside drummer Darrian Douglas, Agid is the co-founder of Second Line Arts Collective, a non-profit organization dedicated to cultivating the artistic and entrepreneurial growth of aspiring creatives. It is no surprise that aspiring clarinetists also look to Agid; his strong social media presence marks him as a leader in the worldwide clarinet community. While boldly and deliberately carving his musical path, Agid says he is simply, “building upon the innovations of his heroes.”

Gregory Agid was born in San Antonio, lived briefly in Dallas, and grew up in Honolulu where he lived until he was 12. “My Mom is from Switzerland and my Dad is from Paris. One summer we went to Switzerland to visit our family. At that point, I was seven and had played piano for a couple of years. One afternoon while visiting my uncle, he brought a clarinet out of the basement that he used to play. I played it for a little while, enjoyed it, and the following Christmas was given my first clarinet. “

When he was 12 in 2000, Gregory moved with his family to New Orleans, the perfect place for a young clarinetist to discover jazz. He attended the Louis Armstrong Jazz Camp where his teachers included Alvin Batiste, Kidd Jordan and Clyde Kerr. “It was a blessing being around them, seeing how they function as musicians. Alvin and Kidd were notorious practicers and it taught me that I had to practice all of the time. They actually enjoyed practicing, it wasn’t punishment, and looked forward to every moment that they had free to play.” Gregory attended the New Orleans Center for Creative Arts (NOCCA) throughout high school and among the faculty members were Batiste (for three of the years) and Ellis Marsalis. His fellow students included such future stars as Jonathan Batiste, Trombone Shorty and Christian Scott.

Despite sometimes being pressured to play saxophone more often, Gregory chose the clarinet to be his main instrument. “I always loved the tone of the clarinet. To me, it has the most beautiful sound in the world. I always thought that it was a shame that there were not more clarinet players and that it was so closely associated with older music. It was great having Alvin Batiste around who played avant-garde music and modern jazz. It made it okay for me to play clarinet in modern settings.”

In 2005, Gregory received a grant through NOCCA to study with the masterful clarinetist Eddie Daniels. “I came out to Santa Fe for a week and hung out with him for four or five hours a day; he gave me a lot of pointers. He was always practicing and taught me that I had to be ready for the gig whenever it comes.” After high school, Gregory studied classical music at Loyola University and earned a jazz studies degree from the University of New Orleans. He also began to work very regularly in the New Orleans area and has since played in a countless number of settings
Gregory Agid has worked with the who’s who of the New Orleans jazz scene and beyond including Ellis Marsalis, Herlin Riley, Marlon Jordan, Kent Jordan, Branford Marsalis, Eric Reed, Jeff “Tain” Watts, and the New Orleans Jazz Orchestra. “One of my most important experiences has been playing with Delfeayo Marsalis and the Uptown Jazz Orchestra since 2011 including a weekly gig in New Orleans and touring South Africa. Playing with that band has resulted in a lot of opportunities for me.” The clarinetist has also performed often at the New Orleans Jazz and Heritage Festival including a tribute to his mentor Alvin Batiste in 2008. Recently he began an association with Michael Buble.

The Gregory Agid Quartet is well featured on his three CDs: Mystery Blues, Words Are Not Enough and the recent Jamz. “Mystery Blues has plenty of energy while the music on Words Are Not Enough is a bit calmer and more relaxed. My favorite part of that CD is the first track ‘Nevermore’ which was written by Harold Batiste. I thought it was the most beautiful melody I had ever heard but thought it would be even better if someone played it on the clarinet. With Jamz, I wanted to capture how we sound live. We went into the studio one day and simply jammed. There are no edits on the record, the performances are long, and it sounds like the type of blowing sessions I used to listen to as a kid.”

Gregory Agid also follows in the footsteps of Alvin Batiste as a teacher. In addition to teaching privately and at New Orleans University, Tulane and other institutions during the past decade, three years ago Gregory founded The Second Line Arts Collective. The nonprofit runs a jazz summer camp in New Orleans for 14-21 year-olds, students who are planning on becoming professional musicians. The organization not only teaches music but the business side of the jazz business.

For the future, Gregory Agid says, “I want to show that the clarinet, with its beauty and versatility, can fit into a limitless number of settings, from modern jazz to playing with orchestras and on pop records. I want to learn and experience so much that someday, no matter what I teach students, I can tell them that it is possible because I did it.”