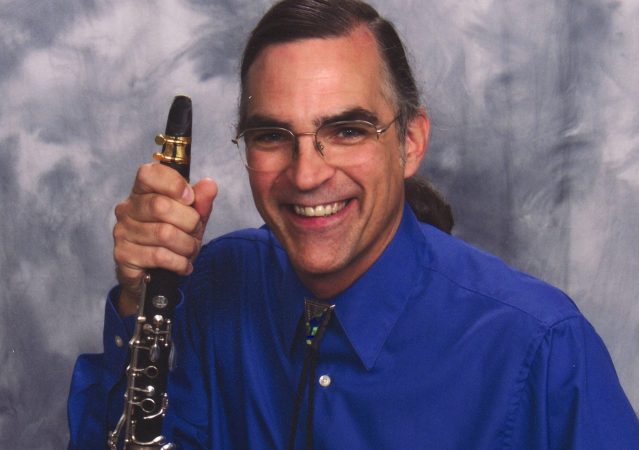 Clarinetist and composer Eric Mandat is internationally recognized for his groundbreaking contributions to contemporary clarinet music. As stated in the Chicago Reader, “Mandat is exploring new worldsY with a unique combination of virtuosity and a creative use of multiphonics…he uses them to create highly personal and expressive compositions that…are loaded with musical meaning.” The Village Voice notes the “suave physicality@ of his presence as a performer, and finds his style to be Ariveting.Mandat tours world-wide as a soloist and chamber musician, presenting lectures and recitals featuring new American clarinet music as well as traditional repertoire. He has premiered his works at international conferences in Chicago, Stockholm, Tokyo, and Vancouver and has appeared as soloist with the Latvian National and Chicago Chamber Orchestras and the Cleveland Chamber Symphony. His group, The Transatlantic Trio, has concertized in the United States, Asia and Europe and recorded trios by Brahms and d’Indy (4tay-CD 4008) that Fanfare finds “easily rank with the best.” Mandat performs regularly with Chicago Symphony’s contemporary chamber ensemble MusicNOW, cited by the Chicago Herald-Tribune last spring for his participation in Osvaldo Golijov’s Ayre with soloist Dawn Upshaw for the way he Aentwined (his) sound with the singer’sY wailing away on klezmer clarinet.Mandat is a member of the Tone Road Ramblers, an eclectic sextet specializing in improvisation and experimental music. They perform at such venues as Merkin Hall in New York and new music festivals nationwide, and are presented by such organizations as the World Music Institute. Their CD, Intersections & Detours (Einstein 007), is described by Option magazine as “filled with wit, joy and creative sparkle.” Their latest CD, The Tone Road Ramblers: The Ragdale Years (Einstein 012) honors the annual artist residency they have held at the Ragdale Foundation since 1993.As a composer, Mandat focuses on solo and chamber works for clarinet. His compositions utilize extended techniques within a framework largely influenced by jazz and traditional music of non-Western cultures. The Clarinet finds that his Aprocess at writing and playing is bound to leave any listener in aweY (One) is constantly challenged and surprised by gorgeous tone color changes, exciting rhythmic action and 21st century clarinetistry.” Mandat is a recipient of the 2000 and 2005 Illinois Arts Council Artist Fellowship Awards for composition. His music is featured in concert and recording by a wide array of today’s clarinetists.Mandat received his education at the University of North Texas (B.M.), the Yale School of Music (M.M.), and the Eastman School of Music (D.M.A.). His principal teachers included Richard Joiner, Lee Gibson, Keith Wilson, Stanley Hasty, and Charles Neidich. He is Professor of Music and Distinguished Scholar at Southern Illinois University at Carbondale, where he teaches clarinet and graduate courses in musical analysis.Eric Mandat is a Buffet-Crampon USA performing artist.