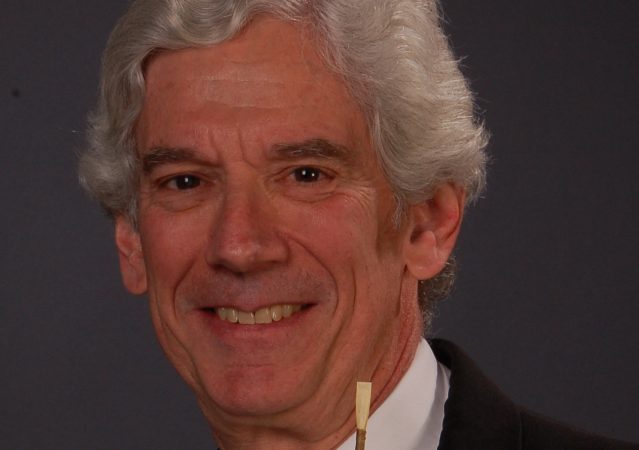 Stephen Colburn, Principal Oboist of the Milwaukee Symphony Orchestra was born and raised in Elmhurst, IL, near Chicago. At age eleven, after seeing the film “The Benny Goodman Story,” he asked to study the clarinet. Interest in rhythm and blues and modern jazz led to taking lessons on the tenor sax, bass clarinet, flute, and piano. At age seventeen during high school band and orchestra rehearsals, he began to notice the many beautiful oboe solos which occurred in nearly every work, and gradually became interested in learning the oboe. After a few months lessons with former Chicago Symphony oboist and Indiana University Professor Jerry Sirucek, Mr. Colburn recalls, “I began to fall in love with the sound and expressive possibilities of the oboe.” He continued his musical studies at IU, earning his Bachelor of Music degree and was awarded the prestigious Performer’s Certificate on the recommendation of the woodwind faculty. During his final semester at IU, he began taking auditions, and was subsequently offered the principal oboe chair of three orchestras. He accepted on of the offers and in September, 1966 became principal oboist, and the youngest member of the Milwaukee Symphony Orchestra.His superb performance as a member of the MSO, as soloist, in chamber music and recital had resulted in accolades from audiences, conductors, and critics from Milwaukee and nationwide. “I found the first oboe to be one of the very highest quality” (NEW YORKER/MSO Carnegie Hall debut)“Colburn’s technical command of John Downey’s demanding work impressed. His tone was full and his pitch was excellent, even at the most extreme ranges and speeds.” (MILWAUKEE JOURNAL/Strini)“As an oboist he is ‘the best.’ The Milwaukee Symphony has been fortunate to have such a ‘soloist’ as their first oboe for years. Stephen Colburn has played my Oboe Concerto better than anyone else.”(LUKAS FOSS, composer and former Music Director, Milwaukee Symphony)“The solo oboe part, brilliantly realized by Stephen Colburn, explores the stratosphere with plaintive chants that eventually take extended bravura flight.” (LOS ANGELES TIMES/Bernheimer)“The Ojai soloist was Stephen Colburn, first oboe of the Milwaukee Symphony; the composer (Sir Peter Maxwell Davies) conducted the festival orchestra…Mr. Colburn was poetic in the work’s long, high flights.” (NEW YORKER/Porter)For fifteen summers Stephen Colburn performed as Principal Oboist with the internationally acclaimed Santa Fe Opera. A reviewer for the SANTA FE REPORTER wrote of Mr. Colburn’s performance in Tchaikovsky’s opera “Eugene Onegin”: “Oboist Stephen Colburn performed remarkably in his many solo passages. His underscoring in the letter scene helped to elevate musically, and he plays with impressive tonal purity and technique.” He has also been guest artist with the Santa Fe Chamber Music Festival, and guest soloist with the Ojai Festival in California where he performed the American premiere of Sir Peter Maxwell Davies ‘Oboe Concerto’ to critical acclaim.Stephen Colburn has appeared as soloist with the Milwaukee Symphony on numerous occasions, performing the Lukas Foss Oboe Concerto under the composer’s direction, the Oboe Concerto by John Corigliano, as well as solo works of Bach, Teleman, Vivaldi, Mozart, Haydn, Barber, Barlow, Martin, and Martinu. Another highlight was his performance of John Downey’s “Discourse,” for oboe harpsichord, and strings with the composer at harpsichord, Lukas Foss conducting the Milwaukee Chamber Orchestra. Mr. Colburn has also enjoyed a parallel career as a conductor. He was inspired by and subsequently studied conducting with Indian University and University of Wisconsin-Milwaukee Professor Wolfgang Vacano. After earning his Master’s degree from UWM, he started a series of free, outdoor concerts at the Villa Terrace Museum in Milwaukee. These concerts, still performed today, led to his being named Music Director and Conductor of the Racine Symphony, a happy and productive association of thirteen years. The Villa-Terrace events also led to the founding of the Milwaukee Chamber Orchestra, soon to celebrate its thirtieth anniversary season. In the spring of 2002, Stephen Colburn concluded a twenty-eight year tenure as Music Director and Conductor of the MCO, having guided the orchestra to a place of performance and prestige in the Milwaukee community. He will return as guest conductor during the 2003-04 season. He has guest conducted the Milwaukee Symphony in its community outreach concerts, and was appointed opera conductor for the MSO Aaron Copland Festival, and American Sacred Musical Festival. For the past twelve summers, Stephen Colburn and soprano Marlee Sabo have founded and directed the Washington Island Music Festival in Door County, to a position of prominence and stability. The festival of chamber music during the first two weeks of August has become a jewel in the crown of the rich cultural season on Washington Island. Mr. Colburn has also been active as and educator and teacher. Several of his former students have advanced to significant orchestral and teaching positions throughout the U.S. He has taught at The Wisconsin Conservatory of Music, Alverno College, and most recently served as Visiting Professor of Oboe at Lawrence University. His current teaching includes Adjunct Professor of Oboe at University Wisconsin-Milwaukee, woodwind Coach for the Milwaukee Youth Symphony Orchestra, as well as maintaining a private teaching studio. In April, 2002, he was the recipient of the Civic Music Association of Milwaukee, Distinguished Citizen Award.Stephen Colburn and his wife, soprano Marlee are the parents of two children: Sara, a soprano with the San Francisco Opera, and Benjamin, an attorney in Minneapolis. Stephen Colburn is a Buffet Crampon USA Performing Artist.