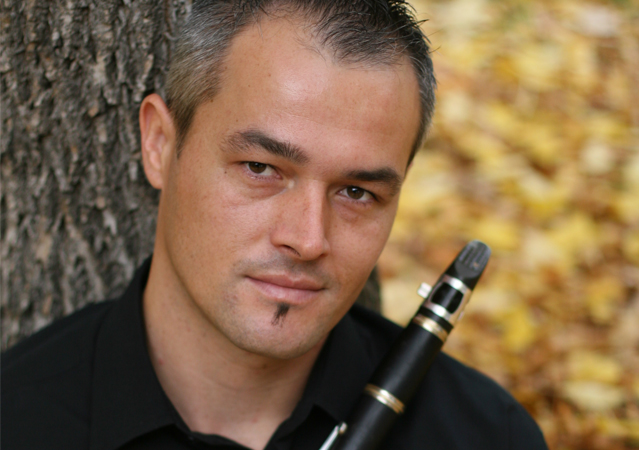 Risto Gjorevski is a clarinetist, a graduate of the Faculty of Music Art in Skopje, Macedonia where he also obtained his Master degree in 2006. He is a performing artists in different formations – solo, duo, chamber ensembles and orchestras. Risto Gjorevski has performed solo or with different ensembles in Austria, Albania, Serbia, Slovenia, Bulgaria, Bosnia and Herzegovina, Poland, Russia, Israel, USA, Indonesia, etc. In 2018 he completed a postdiploma artistical training for clarinet performance at the Fryderyk Chopin University of Music in Warsaw, Poland.

In 2013, he performed with Skopje Woodwind Quintet in Bohemian National Hall (New York City, USA) at the United Nations celebration attended by the UN Secretary General Ban Ki Mun. Together with Sergei Petrov – the first clarinetist of Bolshoi Theatre – Moscow they performed in Bitola and Ohrid Sumer Festival 2014. Last year Risto was guest to the world renown pianist Simon Trpcheski and his project “Makedonisimo” on the Poland tour, playing four concerts. Risto had a remarkable solo performance with the Moscow State Academic Simphony Orchestra in Moscow 2015 and a solo performance with the Wind Orchestra of the Fryderyk Chopin University of Music in Warsaw, Poland 2017. He is a member of the jury since 2013 and has had solo performances at the International Moscow Festival for Slavic Music. In 2018 Risto was the first Macedonian clarinetist playing at the International clarinet festival “Clarimania” in Wroclaw, Poland, where he performed solo recital and masterclass.

He has recorded one solo compact disc – „Moments of Clarinet” and two CDs with the Skopje Woodwind Quintet.