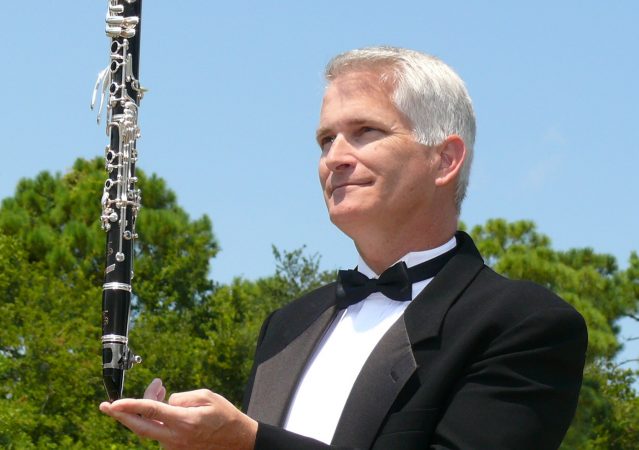 PETER WRIGHT has been principal clarinet of the Jacksonville Symphony Orchestra (JSO) since 1975 and is a frequent soloist, having performed numerous solo recitals throughout the southeastern United States and Canada. He has performed many concerti with the JSO and most recently played the world premiere of Nikola Resanovic’s clarinet concerto, “Collateral Damage”, with the JSO in March of 2005. Other performances have included concerti by Mozart, Finzi, Copland, Rossini, Debussy, and Matyas Seiber. One of his career highlights was in 1997 when the JSO went to New York City and performed at Carnegie Hall. Peter played an extensive solo basset horn part in a Mozart aria sung by the renowned mezzo-soprano, Frederica von Stade. Other notable performances include the New Orleans ClarinetFest as a member of the quartet, “Clarinets in Residence” and at the 2003 ClarinetFest with Elizabeth Crawford, bass clarinetist, in another world premiere by Nikola Resanovic – “Analogues for Clarinet & Bass Clarinet”. Peter was a featured recitalist at the 2006 ClarinetFest in Atlanta, Georgia, where he performed with pianist, Scott Watkins. Born in Bartow, Florida in 1955, Peter Wright began studying the piano at age eight and the clarinet at age ten. He attended Jacksonville University where he received a Bachelor of Music Education degree and the Eastman School of Music where he received the Master of Music degree. He took a sabbatical from the Jacksonville Symphony in 1983 to start a Doctorate in Music at Florida State University. He currently teaches clarinet privately and has been on the faculties of Jacksonville University, Florida Community College at Jacksonville and at the University of North Florida. Peter has an interesting hobby of riding roller coasters all over the world. Peter is a member of the American Coaster Enthusiasts (ACE) as well as the European and Florida Coaster Clubs. In the summer of 2002 he rode coasters in Sweden, Norway, Holland, Germany, and England after attending the International Clarinet Symposium in Stockholm, Sweden.Peter Wright is a Buffet Crampon USA Performing Artist/Clinician.