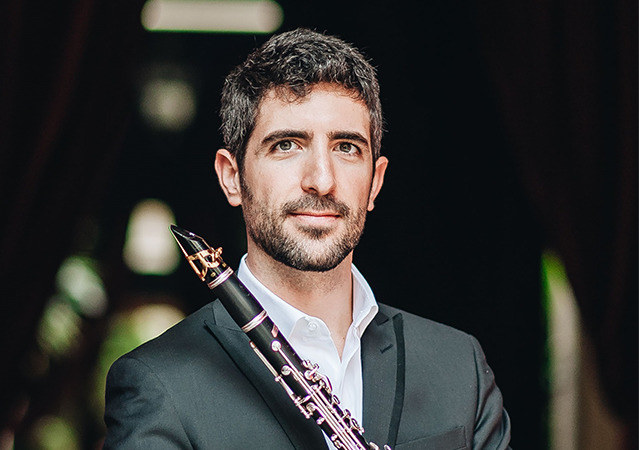 “ Marco Giani, è un vero virtuoso, mi ha impressionato…”
“ Marco Giani, is a virtuoso for real, he impressed me …”
(Interview with Daniele Rustioni E. Parola, Corriere della Sera)
Solo clarinet of ‘I Pomeriggi Musicali’ orchestra in Milano, Marco Giani has an intense activity as soloist,
chamber musician and orchestral clarinetist.
As a soloist he has performed with important orchestras such as: Münchener Kammerorchester in
Prinzregenten Theater in Munich (ARD), Kapelle Dresden Solisten, Deutsche Staatsphilharmonie RheinlandPfalz, Orchestra ‘I Pomeriggi Musicali’ in Milano,… and important conductors including: Walter Weller, Andry
Yurchevich, Helmut Branny, Daniele Rustioni, Christoph Altstaedt, Rani Calderon,…
Recently he has been a soloist in Germany with Staatskapelle Halle orchestra under Josep Caballé Domenech
and again soloist with Orchestra ‘I Pomeriggi Musicali’ on a tour in the major cities of China with a program
dedicated to Gioacchino Rossini, and in Milano, rediscovering one of the concertos for clarinet and orchestra by
Antonio Casimir Cartellieri, of which he did the revision of the solo and orchestral parts.
Marco Giani played in some of the most important concert halls throughout Europe, Canada and the United
States such as the Musikverein in Vienna, Semperoper in Dresden, Konzerthaus in Berlin, Teatro San Carlo in
Naples, Teatro Comunale di Ferrara, Louise M. Davies Symphony Hall in San Francisco, Houston Jesse H. Jones
Hall, Toronto Roy Thomson Hall, Carnegie Hall in New York,…
Winner in numerous National and International competitions, he has also distinguished himself (the only
Italian admitted) at the prestigious ARD International Music Competition in Munich in 2012.
Always sensible to the new repertoire for his instrument, Marco was also the interpreter of first absolute
performances of contemporary pieces, including Zora for clarinet and orchestra by Carlo Galante with Orchestra
‘I Pomeriggi Musicali’ and the conducting of Daniele Rustioni.
Obtained the clarinet Diploma with top marks cum laude with M° Nicola Bulfone, he graduated then from
the master in clarinet with highest grades cum laude at the Conservatory ‘G. Verdi’ in Milan with M° Luigi
Magistrelli and he got the ‘High Virtuosity’ Master in clarinet with M° Fabrizio Meloni.
He has been a member of Shleswig Holstein Musik Festival Academy in Germany, and he participated in
summer courses with M° Ulf Rodenhäuser, and M° Johannes Peitz.
In 2009 and 2010 he was selected and invited to take part in the Gustav Mahler Jugendorchester in Vienna
under the artistic direction of Maestro Claudio Abbado with whom he played on European tours and took part
in the recording of a CD published by Orfeo music recordings with music by Shostakovich and Ligeti.
He collaborated with numerous orchestras including: Orchestra of Teatro La Fenice in Venice, Haydn
Orchestra of Bolzano and Trento, Shleswig Holstein Musik Festival Orchester in Germany, Verbier Festival
Orchestra in Switzerland, “G. Verdi” Theater Philharmonic of Trieste, the Regional Orchestra of Florence,
Cherubini Orchestra of Piacenza and Ravenna, … performing under important conductors such as: I.
Metzmacher, D. Gatti, R. Muti, T. Sanderling, C. Eschenbach, C. Zacharias, L. Foster, C. von Dohnanyi, V.
Gergiev,…
In chamber ensembles he performed with Italian and international prominent musical personalities such as:
B. Canino, V. Mendelssohn, O. Pogorelova, L. Zanardi, I. Veneziano, il Quartetto Indaco, le Cameriste
Ambrosiane,…
In 2014 the publication in ‘World Premiere’ of 2 CD by Naxos, entirely dedicated to works for solo clarinet
and two clarinets by Ernesto Cavallini recorded together with Nicola Bulfone.
He played for radio broadcasts on: hr2 Kultur, RAI Radio 3, ORF, DRS 2, BR, and Radio Popolare.
Marco Giani is regularly invited as a clarinet and chamber music teacher in music courses and materclass and
he collaborated as a clarinet teacher at the “F. A. Bonporti ” conservatory of Trento.
Marco Giani plays Buffet-Crampon Tosca clarinets