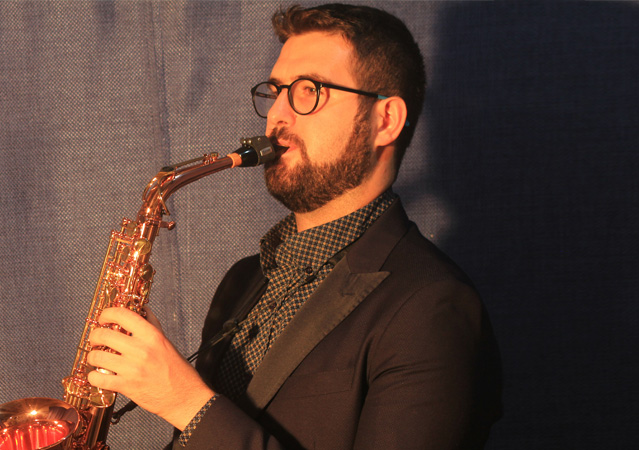 Born in 1993, Raffaele Manuel Padula graduated in saxophone in 2012 at the “Umberto Giordano” Conservatoire of Music in Rodi Garganico, Foggia, where he studied with Maestro Gabriele Buschi. In 2014, at the same Conservatoire of music, he obtained a Master’s degree with honours in Saxophone. Later, in 2017, he graduated with honours in Chamber Music (Master’s degree) at the “Giovan Battista Martini” Conservatoire of Music in Bologna where he studied with Maestro Guido Felizzi. In the meantime, he had the opportunity to study classical and orchestral repertoire with Maestro Daniele Faziani. In the last 2020, he completed his studies with Maestro Hans de Jong at the Royal Conservatoire Antwerp (Belgium) where he obtained a Master II in Arts and Music cum laude.

Currently, Manuel Padula is concluding the Post graduate in Saxophone at the Royal Conservatoire Antwerp with the guidance of Maestro Hans de Jong.

Manuel Padula also achieved many national and international prizes, for instance in 2015 he won the first prize at the “Concorso Internazionale Garganum” playing an interesting composition by Maestro Daniele Faziani. In the following 2017 and 2018 he obtained the first prize at the “Concorso Alberghini” both in chamber music – with the pianist Andrea D’Alonzo – and soloist wind instrument.

After winning an audition, in 2016 dicember 17th, he played as soloist at the Comunale Theatre of Bologna with the orchestra conducted by Maestro Alberto Caprioli.

Manuel Padula regularly works as saxophonist with the Comunale Theatre of Bologna and The Philarmonic Orchestra of Bologna in different productions such as West Side Story in 2018 (conducted by Maestro Timothy Brock) and with the Philharmonic Orchestra (conductor Maestro Kristjan Jarvi) with Stefano Bollani as solist in 2019 (…).

He plays in duo with different pianists as Andrea D’Alonzo and Luca Cocomazzi in majour theatres throughout Italy and Europe. He worked with severals orchestras being Orchestra Aquilana, Wind Orchestra of Royal Conservatoire Antwerp, Symfonie Orkest of Antwerp.

In 2019 he set up the European Panlink Saxophone Quartet which plays several concerts in Italy and Europe.

In 2021 he published his first album “Hasta que la musica se pare” as a tribute to Astor Piazzolla, in duo with the pianist Francesco Monaco.

At a later time, he published another album “In Time” in duo with the pianist Stefano Bezziccheri.

Manuel Padula is a JLV Ligature France (since 2019) and Buffet Crampon artist.