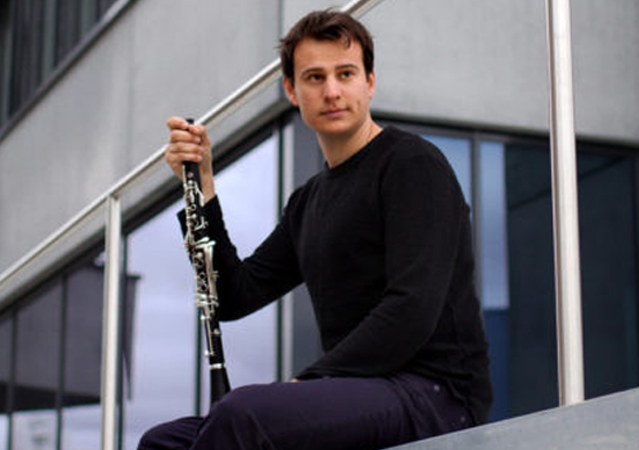 Damien Bachmann, born in Geneva, is one of the most famous clarinetists of his generation. Winner of more than twenty national and international competitions, he performed on some of the prestigious stages in Europe and Asia. His performances and his play are regularly hailed by the press who defines him as “a musician who has achieved grace, ease and prodigious freedom, and who paradoxically knows how to pass from a phrasing of extreme gentleness to an ardor carrying even the minds the most numb “(24H, 2017).

Damien Bachmann studied with internationally renowned soloists and teachers such as François Benda in Basel, Paolo Beltramini in Lucerne, Harri Mäki in Helsinki, Michel Westphal, Thomas Friedli and René Meyer in Geneva. He had the opportunity to improve with Andreas Sunden, Wenzel Fuchs and Bernhard Röthlisberger. Since 2018 he has been in Studies: “Master of virtuosity” (Konzert Exam) at the Musikhochschule-Freiburg (Germany) with Kilian Herold.

He has played as a soloist with orchestras such as the Sinfonie Orchester Basel, the Geneva Chamber Orchestra, the Züricher Kammerorchester, the National Chamber Orchestra of Armenia and the Argovia Philharmonics. He won several prices such as the Migros, Friedl-Wald, Schenk, Dienemann, Marescotti, Nicati and Hirschmann awards, as well as the prestigious “Förderpreis” 2016 from the BOG Foundation in Basel and a second prize at the “Kiefer Hablitzel 2018 Music Competition”.

Passionated about chamber music, Damien Bachmann is regularly invited to play with established artists of his generation, such as the pianists Christian Chamorel, Nikita Mndoyants, Florian Noack and François-Xavier Poizat, with the violinist Aleksey Igudesman, the cellists Lionel Cottet, Nadège Rochat, Christoph Croisé, Astrig Siranossian, but also with the Ebène String Quartet, the Casal String Quartet, the Aviv String Quartet, the Gehrard String Quartet, the Terpsycordes String Quartet and the Geneva String Quartet. He has performed in recital or solo concerts in China’s famous concert halls in Shanghai, Beijing and Guangzhou, in Switzerland at the Tonhalle Zürich and Victoria Hall in Geneva, but also in France, Germany, South Africa, Czech Republic, Romania, Hungary.

In recent years, invited as a jury member of several competitions, he is also teaching and gave already masterclasses in Switzerland, China and Romania.

As the clarinet could play different repertoires, Damien Bachmann collaborates also with musicians from other horizons. He is involved in the creation of shows for children such as “On a perched  tree” created in 2017 in the tradition of the educator Jacques-Dalcroze, or the project “Heimat – Apartment House recomposed” of the multi-disciplinary collective Mycelium. He is also co-founder and artistic director of the Puplinge Classique Festival, which celebrated its 10th anniversary in the summer of 2019.