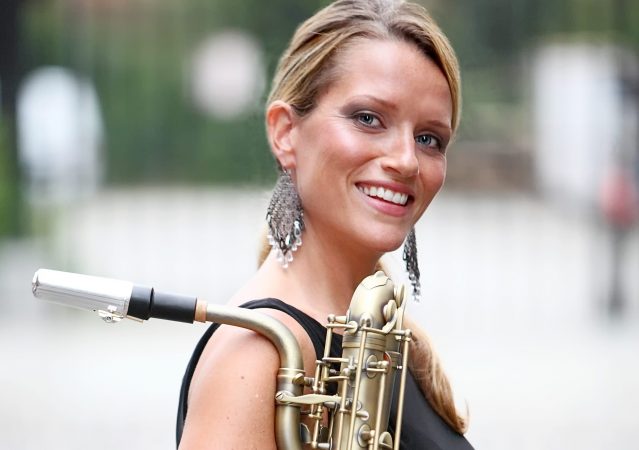 Grammy award winning saxophonist Lauren Sevian has been performing professionally since the age of 12, first on the piano, then on the saxophone. At the age of 16 she won the Count Basie Invitational soloing competition, which led to a feature performance with the Basie Band. By the age of 17 she had already performed at Carnegie Hall, Lincoln Center, & the Village Vanguard.In the fall of 1997, Lauren came to NYC to attend the prestigious Manhattan School of Music where she studied privately with Mark Turner, Donny McCaslin, Steve Slagle, Joe Temperley, and Mike Abene. Upon entering her senior year of college, Lauren was given the chance to go on tour with the critically acclaimed big band Diva. After returning from the Diva tour, Lauren returned to MSM and graduated in the spring of 2001 with a bachelor of music degree.Some highlights of Sevian’s career: in 2003 she became a regular member of the Mingus Big Band and has performed with them throughout the US and internationally; she was in the movie Mona Lisa Smile which starred Julia Roberts; in 2006 she recorded with Greg Osby for Joan Osbourne’s “Breakfast in Bed”; in 2007 she performed Charles Mingus’ “Epitaph” with the Mingus Epitaph Orchestra in several concert halls across the US; in the summer of 2007, she joined the Litchfield Jazz Camp faculty as a teaching artist; in 2008 she was invited to adjudicate & perform at the Monterey Jazz Festival’s “Next Generation” Festival, where she performed with Christian McBride, Terry-Lynn Carrington, George Duke, Billy Harper, Ron Westray, and many others. In 2009, 2010, & 2011 she toured with the Rescue Me Comedy Tour featuring Dennis Leary and appears in the Comedy Central special “Douchebags & Donuts”. In October 2009 she was invited to perform as a special guest in Ireland and with the Nikki Iles Quintet at the Guinness Cork Jazz Festival. In 2009 & 2010 she toured France with the Black Rock Coalition Orchestra led by songstress Tamar-kali. In 2012 she had the pleasure of performing with vocalist Jane Monheit as part of the group “Jane Monheit and the Ladies of Jazz” assembled by promoter Mike Gow. She has received numerous awards throughout the years, nominated from 2008-present for the Downbeat Critics Poll “rising star” baritone saxophone, a SESAC jazz award for “Blueprint”, and is now a Grammy award winner for the Mingus Big Band’s “Live at the Jazz Standard.” (2011)Lauren has two quartets, the “LSQ” (bari, piano, bass & drums) & the “Eb Quartet” (bari, alto, bass, & drums). Musicians that have performed in either group include: George Colligan, Helen Sung, Adam Burnbaum, Boris Kozlov, Brad Jones, Marcos Varela, Johnathan Blake, Jeff Davis, E.J. Strickland, Curtis Torian, & Mike DiRubbo. Another recent project is the “Buffet Sax trio” which was put together by Buffet-Crampon USA, featuring Lauren, Jacob Yoffee (tenor), and Russell Kirk (alto) as the front line. She has performed as a leader at clubs such as the Kitano, Smoke, Jazz Gallery, Mattatuck Museum, and Fat Cat. The “LSQ”, released “Blueprint” in December 2008 on Greg Osby’s label Inner Circle Music. “Blueprint” spent many weeks in the top 20 on the Jazzweek chart, and has also been included in numerous best of 2009 lists, receiving a national performance activity award from SESAC in 2010, “best of 2009” list by All About Jazz, and received rave reviews by DownBeat, Cadence Magazine, Amazon, and All About Jazz. She has also done countless radio interviews following the release of Blueprint. Other publications she has been featured in: Saxophone Journal, The Sax (Japan), Hothouse, Jazz Inside, Boston Globe, Newsday, allaboutjazz.com, bestsaxophonewebsiteever.com, montereyjazzfest.org, soufflez.net, and George Colligan’s “Jazz Truth”.In addition to performing, Ms. Sevian is a teacher, clinician, conductor, and adjudicator. Highlights include the summer of 2007, she joined the Litchfield Jazz Camp faculty as a teaching artist. In April 2008 she was invited to adjudicate & perform at the Monterey Jazz Festival’s “Next Generation” Festival. In 2011 she was the guest artist/conductor for the Westchester All-County Jazz Ensemble. In 2012, she was a featured artist & adjudicator with the UMSL (University of Missouri St. Louis) jazz ensemble as part of the Greater St. Louis Jazz Festival. As an artist for Buffet-Crampon she has given numerous clinics & performances around the country, most recently at the JEN conference in New Orleans, and at Saxquest in St. Louis, MO. She has also taught at New School and teaches for the Brooklyn Conservatory’s “Music Partners”.Lauren Sevian endorses Buffet-Crampon saxophones, RPC mouthpieces, and Rico Reeds.