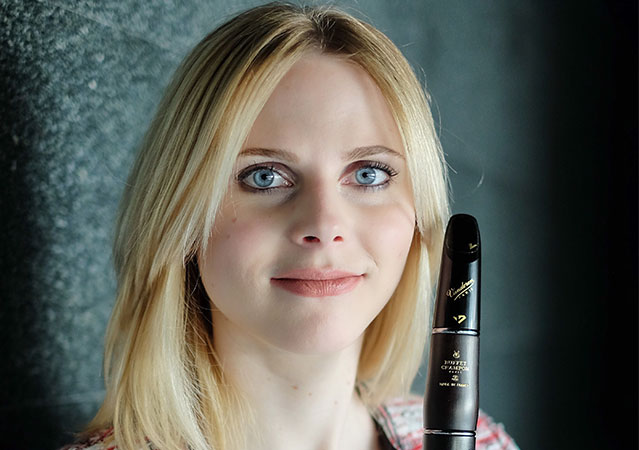 Hannelore Vermeir finished her degree of piano and clarinet at the academy of music August De Boeck at Asse (Belgium). Afterwards she completed a specialized master of clarinet with the highest distinction at the conservatory School of Arts Ghent (Belgium), with professors Eddy Vanoosthuyse, Danny Corstjens and Frank Coryn. She continued to study a sixth year called “finalité spécialisée” at the Conservatoire Royal de Liège. During this year she collaborated in a project with l’HEMU de Lausanne (Switzerland). Furthermore Hannelore followed masterclasses with Pascal Moraguès, Philippe Cuper, Calogero Palermo, Juan Ferrer, Nicolas Baldeyrou, Jean-Luc Votano, Roeland Hendrikx and others. Additionally she attended a course at the Accademia Internazionale di Musica di Cagliari (Sardinia) with Florent Héau.

She obtained her orchestral experience as a freelance musician with the Brussels Philharmonic Orchestra and the Orchestre Philharmonique Royal de Liège. Since May 2017 she is active as the co-principal and E flat clarinetist at the Thailand Philharmonic Orchestra. Meanwhile she has worked nearby as a substitute player in Seoul (South-Korea).

Hannelore is also active as a chamber music musician and has played the great repertoire of Brahms, Bruch, Messiaen, Stravinsky etc, as well as contemporary music. She was a member of various ensembles representing newly written music and participated in the En Avant Mars festival in Belgium, known for its artistic and out of the box programming.