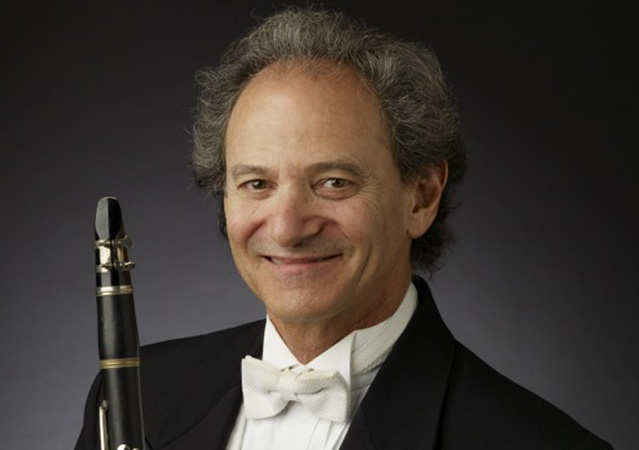 Principal clarinet of The Cleveland Orchestra since 1976, Franklin Cohen has distinguished himself as one of the most outstanding clarinetists of his generation. He first gained international recognition and acclaim when, at the age of 22, he became the first clarinetist awarded first prize at the International Munich competition. Mr. Cohen has appeared as soloist with The Cleveland Orchestra in nearly 200 performances at Severance Hall, Blossom Music Center, and on tour in the United States, the Far East, and Europe, appearing with Lorin Maazel, Christoph von Dohńanyi, Franz Welser-Möst, Christoph Eschenbach, Vladimir Ashkenazy, Leonard Slatkin, and others. He recorded Mozart’s Clarinet Concerto with the Orchestra and Christoph von Dohnanyi for Decca Records, and is also the soloist in Debussy’s First Rhapsody on a Deutsche Grammophon recording with the Orchestra and Pierre Boulez that won two Grammy Awards in 1996. Mr. Cohen has recorded the Brahms clarinet sonatas with Vladimir Ashkenazy for the Decca label.A native New Yorker, Franklin Cohen studied at the Juilliard School. He began his professional career when Leopold Stokowski chose him as principal clarinet for the American Symphony Orchestra. Mr. Cohen subsequently held that position with the Baltimore Symphony Orchestra and the Casals Festival Orchestra. As a recitalist and chamber music performer, he has participated in the Aspen, Casals, Marlboro, and Santa Fe music festivals. He has been a featured artist with many well-known string quartets, including the Cavani, Emerson, Guarneri, Miami, Miro, Orion, Takács, Tokyo, and Ysaÿe. In addition, Mr. Cohen has collaborated as a chamber musician with leading artists including Emanuel Ax, Pinchas Zukerman, Mitsuko Uchida, Richard Goode, Vladimir Ashkenazy, and Jessye Norman.Franklin Cohen has chaired the Cleveland Institute of Music clarinet department since 1976, and many of his former students hold important positions throughout the music world. He also recorded the original clarinet and string quartet version of Osvaldo Golijov’s Dreams and Prayers of Isaac The Blind, with members of The Cleveland Orchestra at Severance Hall in May 2010.Mr. Cohen has two children, both of whom graduated from the Cleveland Institute of Music. Diana is a concert violinist and Alexander is a professional timpanist.