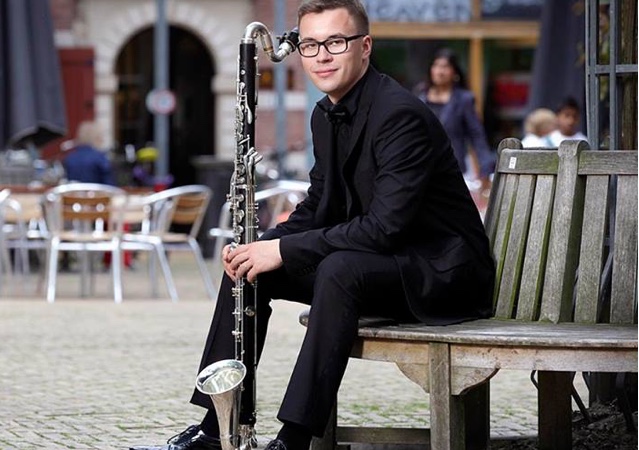 Tomasz Żymła is a clarinetist (specialism: bass clarinet), connected with the Katowice Academy of Music. He is currently pursuing a doctoral study there, on top of which he also teaches clarinet, chamber music, and contemporary music performance. Tomasz is a teacher at interpretation courses for wind instruments in Jastrzebie Zdroj and Duszniki Zdroj.

Having graduated in clarinet with distinction from the Katowice Academy of Music (MA, class of A.Adamski), Tomasz followed a bass clarinet study at The Royal Conservatoire of The Hague (class of Erik van Deuren), where he obtained a MMus degree. He has been awarded a number of international prizes: 1st prize at IV Nederlands Klarinet Concours in Zwolle (The Netherlands), 3rd prize (1st and 2nd were not awarded) at XIII Concorso Internationale per Clarinetto Città di Carlino (Italy), 1st prize plus a special prize at IV West Pomeranian Clarinet Festival in Szczecin. As one of the laureates of the American Protégé competition, he had his debut during the Winners Recital at Carnegie Hall.

In 2010, Tomasz performed as a György Ligeti Academy soloist at Muziekgebouw in Amsterdam. He played a concerto for bass clarinet and orchestra wArd composed by R.Nachson. During the artistic season 2012/13, Tomasz has been following a whole year internship at the position of a bass clarinetist at Residentie Orkest in The Hague. In 2014, Tomasz took part in a Dutch National Opera production – Kopernikus by Claude Vivier. In 2015, he performed Echange by I.Xenakis for bass clarinet and an instrumental ensemble consisting of players from Orkiestra Muzyki Nowej. A year later, he performed at the International Festival of Cracow Composers, where he made a Polish premiere of There for bass clarinet solo written by J.Amador. In 2016, he was invited for a trial period at the position of a solo bass clarinetist of the Royal Liverpool Philharmonic Orchestra