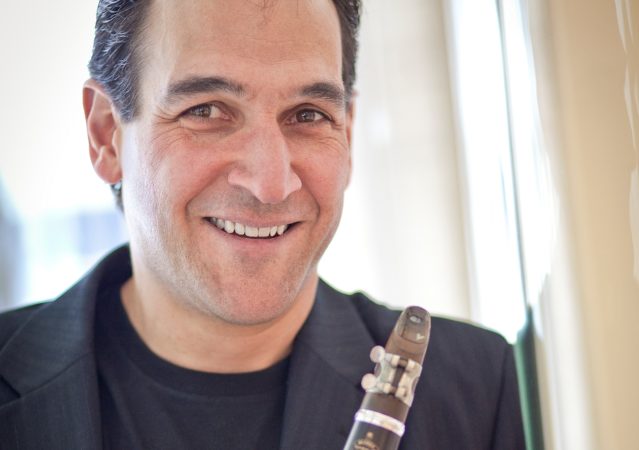 Critics have praised clarinetist Mark Nuccio for both his solo and chamber appearances,  describing him as “the evening’s highlight”, full of “mystery and insight” and “shaping his phrases beautifully with a rich, expressive tone.” (NY Times)

Mr. Nuccio is currently the Principal Clarinetist of the Houston Symphony since 2016.  Prior to that, he was a member of the New York Philharmonic having joined in 1999 as Associate Principal and Solo  E-flat Clarinetist. During Nuccio’s 17 years in the NYP, he served as Acting Principal Clarinet for four years from 2009-2013. Prior to his service with the Philharmonic, he has held positions with orchestras in Pittsburgh, Denver, Savannah, and Florida working with distinguished conductors such as Lorin Maazel, Kurt Masur, Mariss Jansons, Riccardo Muti, Zubin Mehta, Erich Leinsdorf, Claudio Abbado, Riccardo Chailly, André Previn, Christoph von Dohnányi, Valero Gergiev, Charles Dutoit, Gustavo Dudamel, Esa Pekka Salonen, Michael Tilson Thomas, Alan Gilbert, Andres Orozco Estrada, and Juraj Valcuha. Additionally, Mr. Nuccio has toured extensively with the Houston Symphony, the New York Philharmonic and the Pittsburgh Symphony Orchestra and in numerous countries, recorded with all three orchestras, and performed regularly with the Philharmonic on the award-winning series, Live from Lincoln Center, broadcast on PBS. Recent highlights include the Philharmonic’s historic and newsworthy visits to North Korea and Vietnam.

An active solo and chamber musician, Mr. Nuccio has been featured with various orchestras in the United States and made multiple appearances as a featured performer at the International Clarinet Association conventions. He made his subscription solo debut with the Houston Symphony in 2018 with several other appearances since then including his most recent March, 2022 concerto.  Nuccio’s subscription solo debut with the New York Philharmonic was Feb. 10, 2010 and then returned to perform the Copland Concerto with the NY Philharmonic under the baton of Alan Gilbert in June of 2013. Other highlights include a New York recital debut at Carnegie Hall in 2001 and his Japanese recital debut in 2002. He continues to regularly perform recitals in  Asia and Europe as well as across the United States and in New York, at Merkin Concert Hall, 92nd Street Y, Carnegie Hall, and the Metropolitan Museum of Art. Mr. Nuccio is on the faculty at Brevard Music Center and also participates in the chamber music series at the Strings Music Festival in Steamboat Springs, Colorado, performs at Festival Napa Valley, and recently helped to create and became the Artistic Director at the newly formed music festival called the Lake Lure Music Festival in Lake Lure, NC.  In 2023, will perform and teach for the first time in the Sarasota Music Festival.

As a studio musician, Mr. Nuccio is featured on numerous movie soundtracks, including Failure To Launch, The Last Holiday, The Rookie, The Score, Intolerable Cruelty, Alamo, Pooh’s Heffalump, Hitch, The Manchurian Candidate, as well as various television commercials, Super Bowl music and the Master’s Golf Tournament. He has also performed on the Late Show with David Letterman and on the 2003 Grammy Awards. His own debut album featuring the clarinet quintets of Mozart and Brahms, Opening Night, was released in November 2006.

A Colorado native, Mr. Nuccio was awarded the “Distinguished Alumni Award” from his alma mater, the University of Northern Colorado. He also holds a master’s degree from Northwestern University where he studied with renowned pedagogue Robert Marcellus.

Beyond his active performing schedule, Mr. Nuccio is committed to training the next generation of musicians and currently serves as music faculty for University of Miami’s Frost School of Music in Coral Gables, FL.  He also teaches masterclasses in the U.S. and abroad.  His focus as a teacher and pedagogue was further illustrated in his published book called “The Audition Method, volume 1”, an in-depth study of some of the most visible excerpts in the repertoire used in winning an orchestral clarinet position.  This is now become a series that, in the near future, “The Audition Method” will include additional books… Clarinet volume 2, Violin, Flute and French Horn…all a part of Nuccio’s creation with partner and former student, Benjamin Baron.  The other instruments will be authored by leading performing and teaching orchestral artists on the applicable instrument around the United States, each within the same style of in-depth presentation. This will help the young student better understand each excerpt and with exercises included for each!

Mark Nuccio is a performing artist/clinician for Buffet Music Group and a D’Addario Advising Artist & Clinician.