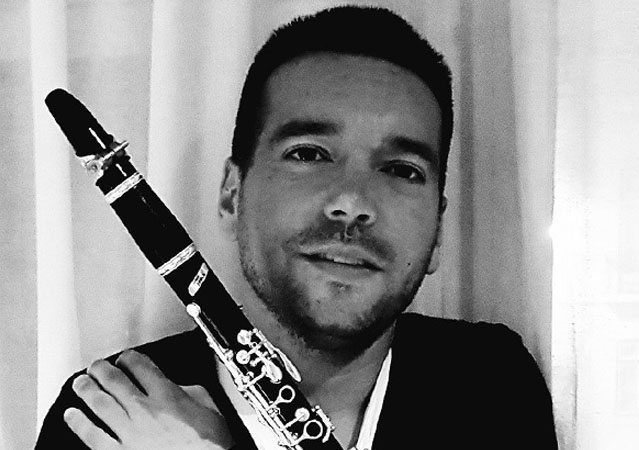 João graduated at Escola Superior de Música e Artes do Espetáculo in Porto with professor António Saiote. During his bachelor’s degree he was distinguished by IPP. In 2012 João completed the Master`s Degree at the University of Évora in the class of Professor Etienne Lamaison. Later, João also did a Master’s degree in Music Teaching at Escola Superior de Música in Lisbon.

During his career he won some of the most prestigious national competitions, such as 1st prize at Concurso Helena Sá e Costa (Porto, 2003) and Young Musicians Award (Prémio Jovens Músicos /Prémio Maestro Silva Pereira) in Lisbon, 2006.

As an orchestral experience, João was part of Gulbenkian Orchestra between 2006 and 2010 and Iberoamericana Orchestra in 2008. He also collaborate with other orchestras, such as Southern Classical Orchestra (Algarve) and Portuguese Symphonic Orchestra (Lisbon).

As a Soloist, he performed in a concert of International Clarinet Association (Porto) and has appeared as a soloist with ESMAE Orchestra, ESML Orchestra, Banda Sinfónica Portuguesa, Gulbenkian Orchestra, Southern Classical Orchestra and Cascais Chamber Orchestra.

In 2009 João was invited to European Union of Music Competitions for Youth (EMCY), taking part in a tour in Germany. During this tour he performed in several concerts and recorded Deutsche Welle Radio.

Currently he also has carried out several projects related to Portuguese and Brazilian Music.