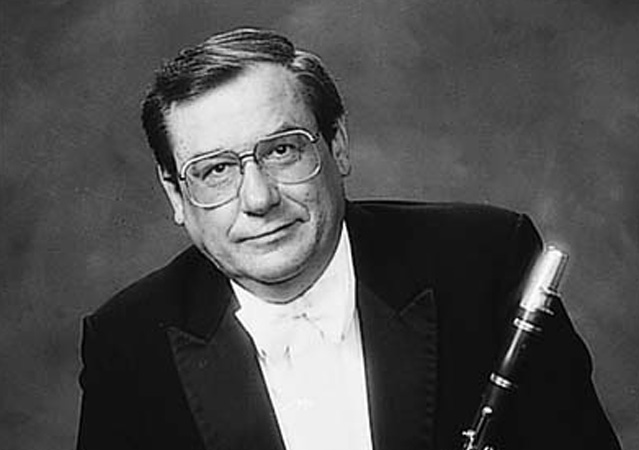 Russell Dagon maintained a dual career as an orchestral musician and teacher of the clarinet from 1966 through 1999. He accepted a full time appointment as Professor of Clarinet at the Northwestern University School of Music beginning in the fall of 1999. Dagon retired from Northwestern in 2005 and is now an Emeritus Professor of Music from that institution. Mr. Dagon had been a part time faculty member at Northwestern since 1981 and prior to that, served on the faculties of the University of Wisconsin campuses at Oshkosh, Milwaukee, Waukesha and Madison. Additional faculty positions were held at Carroll College, the Wisconsin Conservatory of Music, the State University of New York College at Fredonia and at Bemidji State College in Minnesota. Mr. Dagon is extremely proud of the accomplishments of his students who are filling orchestral, university, public school and other music related positions around the world. His summers have been spent in coaching the clarinet and wind sections of the National Youth Orchestra of Canada along with various other festivals.Mr. Dagon was the Principal Clarinetist of the Milwaukee Symphony Orchestra from 1969 through the 1998-99 season. He was a soloist with that organization on numerous occasions and has been heard on the orchestras syndicated radio broadcasts throughout North America, Great Britain and on The Voice of America. In addition, he has been the Principal Clarinetist on all of the Milwaukee Symphony recordings for the Koss Classics, Nonesuch and Telarc labels during his tenure with the orchestra. Prior to his appointment with Milwaukee Mr. Dagon was, from 1966-69, the Second and E-flat Clarinetist of the Buffalo Philharmonic Orchestra. Russell Dagon received his Bachelor of Music Degree from Northwestern University in 1961 and the Master of Music from that same institution in 1962. He did additional graduate work at the Eastman School of Music. His primary clarinet teachers were Stanley Hasty, Cloyde Williams and Jerome Stowell.Dagon remains active as a teacher, clinician and chamber music performer and has been an Artist/Clinician representative for Buffet/Crampon Clarinets since 1992. He has had the privilege of presenting solo recitals and/or workshops for the International Clarinet Association Conferences at Atlanta, The Ohio State University, Florida State University and the Oberlin Conservatory. In addition to the above he has presented recitals and master classes at numerous other campuses, festivals and workshops throughout North America.Russell Dagon was a founding member of the Wisconsin Chamber Players, the Milwaukee Chamber Orchestra and the Trio Suoni. For many summers, he directed the Chamber Music Festival at Birch Creek Farm in Door County, Wisconsin. Russell Dagon’s commitment to chamber music has continued through his participation with musicians from around the world, in the National Youth Orchestra of Canada’s Chamber Music Series, at Northwestern University as a faculty performer, on Chicago radio station WFMT’s live broadcasts, and at many other venues.Russell Dagon is a Buffet Crampon USA Performing Artist.