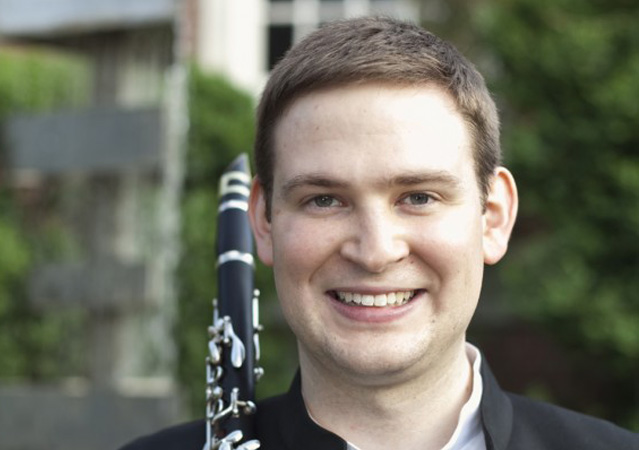 Recognized for his “rich, luscious tone quality”! (The Clarinet), Rob Patterson is quickly establishing himself as one of the most exciting and versatile clarinetists of his generation. Currently Assistant Professor of Clarinet at Boston University, Patterson was most recently Principal Clarinet of the Charlottesville Symphony and a member of the faculty at the University of Virginia. Particularly at home in chamber music, Mr. Patterson’s performances have taken him across N0l1h and South America, as well as Europe and Asia. He has performed contemporary music as a member of the VERGE Ensemble in Washington, DC and was previously a member of the Philadelphia-based Ensemble 39, a mixed group of strings and woodwinds that is active in commissioning new works. Mr. Patterson’s festival appearances include Bravo! Vail, Festival Lyrique International de Belle-Ile-en-Mer, Garth Newel Music Center, Music from Angel Fire, and the Yellow Barn Music Festival. At Yellow Barn, Boston Globe critic Jeffrey Johnson observed that in his performance of Edison Denisov’s Ode, Mr. Patterson “played the part with command finding the extremes the work sought to articulate”.Rob Patterson is a devoted teacher. In addition to his work at the University of Virginia, he has served on the faculties of the Sewanee Summer Festival in Sewanee, TN and the Yellow Barn Young Artist Program in Putney, VT. He has presented classes at The Juilliard School, James Madison University, Virginia Commonwealth University, Virginia Tech, and Taipei Municipal University. Mr. Patterson’s solo recording, Gumbo, was made in 2011 as a result of a grant from the D.C. Commission on the Arts and Humanities. The disc has earned critical acclaim and was voted Best Classical Recording of the Year by the Washington Area Music Association. That same season, Mr. Patterson was a Strathmore Artist in Residence, which included a series of solo recitals, master classes, educational concerts, and a recital at the John F. Kennedy Center for the Performing Arts. Hailing from Cincinnati, OH, Mr. Patterson earned degrees from the Curtis Institute of Music and the University of Southern California. His principal teachers were Yehuda Gilad, Richard Hawley, and Donald Montanaro. Mr. Patterson is proud to be a Buffet-Crampon performing artist.