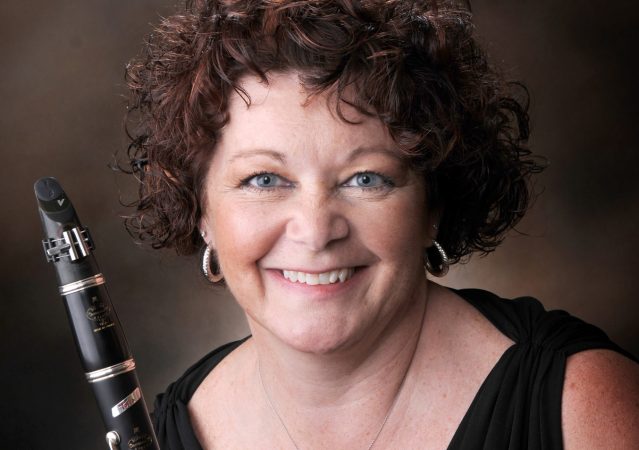 Lynn Ann Musco is currently celebrating twenty four years as Professor of Clarinet and Coordinator of Woodwind Studies at Stetson University, a position she has held since 1988. She received a Bachelor of Fine Arts degree in clarinet performance in 1983 from the University of Wisconsin-Milwaukee, the Master of Music degree in clarinet performance from New Mexico State University in 1986, and the Doctor of Music degree in clarinet performance from Florida State University in 1994. Her academic duties at Stetson include teaching applied clarinet ( the studio averaging 22 students per year over the past 20 years), clarinet pedagogy, conducting the clarinet choir and coaching chamber music. Her non-academic positions within the School of Music include serving as an academic advisor for music students, coordinating the woodwind area, and membership on the Dean’s Faculty Advisory Committee and the Promotion and Tenure Committee. Dr. Musco serves the Stetson community as member and Chair of the University’s Faculty Admissions Committee, a position she has held for the past 8 years, and Stetson Academic Leaders. She also serves as the Director of the Stetson University Summer Clarinet Clinic and is a member of the Florida Bandmaster’s Association, Florida Music Educators National Conference, National Band Association, International Clarinet Association, Pi Kappa Lambda, and Phi Kappa Phi. Dr. Musco is an active performer both on and off the Stetson University campus. She is a founding member of Tres Vientos, and Veritate Winds (resident faculty ensembles at Stetson University); both have received critical acclaim here and abroad and were frequently heard on “Central Florida in Concert” on WMFE 90.7 (Orlando). Veritate Winds has received two invitations to perform at the International Double Reed Workshops. Dr. Musco holds the principal clarinet position in the Bach Festival Orchestra can frequently be seen performing with the Orlando Philharmonic Orchestra and when her schedule permits, The Florida Orchestra and the Brevard Symphony Orchestra. She has performed with the Festival Musical de Santo Domingo under the artistic direction of Philippe Entremont for multiple seasons. She is a founding member of Southern Winds and Southern Harmonie (a professional wind ensemble and chamber ensemble which made their performance debuts in 2001 and 2003 respectively), is often called to perform with Keith Brion’s New Sousa Band, and is an Educational Materials Recording Artist for Carl Fisher. She performs both solo and chamber music recitals, is an adjudicator for various musical events around the state, and maintains a private studio. Dr. Musco quite often performs Florida premiers of new pieces, most recently the Karel Husa Three Studies for solo clarinet, but also the Michel Dougherty Brooklyn Bridge, Concerto for Clarinet and Band by John Heines, and Four Desert Songs for Clarinet and Wind Ensemble by David Maslanka. She has been a featured soloist with the Bach Festival Orchestra, most recently performing the Aaron Copland Concerto for Clarinet and Orchestra. One of the personal highlights of her performing career as solo artist was with the Vandercook Symphonic Band at the Midwest Band and Orchestra Clinic in Chicago (December 2007), her father (Lewis Schmidt, a Vandercook alumnus) wielding the baton. She has performed the Southeast Premier performances of the Clarinet Concertos for Clarinet and Orchestra by William Bolcum and Henri Brandt and is frequently involved with World Premieres of works for various orchestrations by many area composers, most recently a piece for unaccompanied clarinet entitled “Scurry” which was written and dedicated to her by Dr. Sydney Hodkinson. Dr. Musco is an Artist/Clinician for BuffetCrampon and performs on the Tosca Greenline Bb and A clarinet and an R13 Eb clarinet, a custom mouthpiece by David McClune, Vandoren Black Master reeds and the new BG DUO ligature. She can be heard on compact disc recordings with Tres Vientos on Lakeside records and with the American Chamber Players on Klavier records. Dr. Musco is in the process of recording her first solo CD of unaccompanied American clarinet pieces to be released in early 2012.She lives with her husband, Enrico, in DeLand; her son, Alexander, a musician, artist and writer, will graduate in June 2013 from DePaul University with the degree of Bachelor of Arts/Music Emphasis.