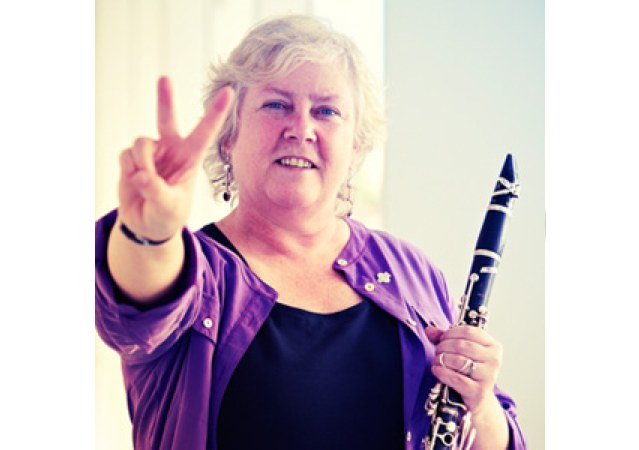 Kelly Burke joined the faculty at the University of North Carolina at Greensboro in 1989.

She is currently the principal clarinetist of the Greensboro Symphony Orchestra and bass clarinetist of the Eastern Music Festival Orchestra. Equally at home playing Baroque to Bebop, she has appeared in recitals and as a soloist with symphony orchestras throughout the United States, Canada, Germany, New Zealand, Australia, and Russia.

An avid chamber musician, Burke is frequently heard in concert with the Mallarmé Chamber Players, for whom she plays both clarinet and bass clarinet, the EastWind Trio d’Anches, Middle Voices (clarinet, viola and piano), and the Cascade Wind Quintet.Burke’s discography includes several recent releases with Centaur Records: the Russian Clarinet, with works by Prokofiev, Shostakovich, Glinka, Melkikh, and Goedicke.

She has also recorded for Telarc, Albany and Arabesque labels. Click on the CD title to hear sound clips. Middle Voices: Chamber Music by Eddie Bass will be released in the fall of 2005. Burke has received several teaching awards, including UNCG’s Alumni Teaching Excellence Award, the School of Music Outstanding Teacher Award, has been named several times to Who’s Who Among America’s Teachers, and was recently honored with the 2004 UNC Board of Governor’s Teaching Excellence Award.

She is the author of numerous pedagogical articles and the critically acclaimed book Clarinet Warm-Ups: Materials for the Contemporary Clarinetist. She holds the B.M. and M.M. degrees from the Eastman School of Music and the D.M.A. from the University of Michigan. Burke is an artist/clinician for Rico International and Buffet Crampon Clarinets.