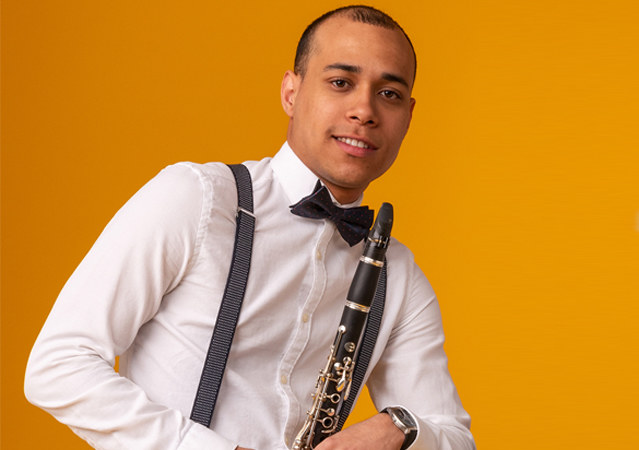 In 2010 he took lessons with the professors Carlos Alexis Escalona and Carmen Borregales, few months later he entered in the Venezuelan Clarinetist Academy, where he had the privilege of being in the Valdemar Rodriguez`s studio.

In 2010 he did his first tour to Ecuador with the Francisco de Miranda Symphony Orchestra conducted by Andres Gonzalez. One year later he got the 2nd prize at the IX Festival of Clarinetists from Venezuela where he also played Mendelssohn for Clarinet and Corno di Basset for the closing of the Festival with his professor and friend Samuel Aparicio.

In this Festival he received many masterclasses with Michael Arrignon, Antonio Saiote, Luis Rossi, Luis Mora…
In 2012 he had the opportunity to assist to the Spaincellence Course in Spain to have lessons with Yehuda Gilad, and had the chance to perform at the end of the course.

In 2013, he was invited to play in Europe with the Simon Bolivar Band orchestra, after this tour, he also received some lessons with Professor Paul Meyer and Aude Richard Camus and three years later, he was a semi-finalist in the Kansas Young Artists Competition, Lawrence.

In October 2020 he won the position of reserve clarinet at the Junge Philharmonie Valiant De Switzerland and in December of the same year the second prize at the SAVA DIMITROV competition in Bulgaria, Sofia. He is currently finishing his bachelor’s degree in classical music at the Zürich University of the Arts with Matthias Mueller.