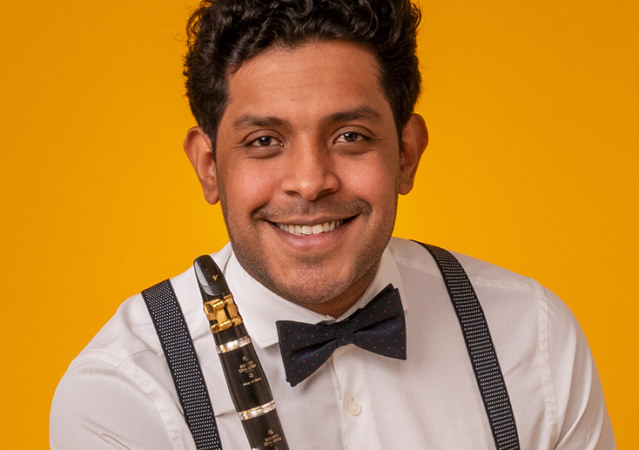 Venezuelan clarinetist born in San Carlos-Cojedes in 1990, he began his musical studies with “El Sistema”, created in 1975 by the Venezuelan maestro José Antonio Abreu who had the idea of systematizing music education and promoting the collective practice of music through symphonic orchestras, social organization and community development.

At the age of 1 he received his first clarinet lessons with professors Franklin Linares and Omar Sanchez. At the age of 14, he was admitted to the Simon Bolivar Conservatory of Music in the clarinet class of Alfredo Martinez and in chamber music of David Ascanio. He then entered the Latin American Academy of Clarinets where he studied with: Valdemar Rodriguez, Edgar Pronio, Jorge Montilla, Gorgias Sanchez, Orlando Pimentel, Carmen Borregales and Jesús Anton.

Until 2016, he was principal clarinet of the “Teresa Carreño” Symphony Orchestra of Venezuela, with whom he performed in important venues in Europe and Asia under the direction of: Christian Vasquez, Gustavo Dudamel, Sir Simon Rattle, Claudio Abbado, Diego Matheus, Raphael Frühbeck de Burgos and Ulises Ascanio. That year he obtained his music diploma at the National Experimental University of the Arts, under the direction of Valdemar Rodriguez.

In France since 2016, he has continued his musical training first with Jérôme Voisin at the Conservatoire of Boulogne Billancourt and has then he obtained his Master with great distinction at the Conservatory of Versailles with Philippe Cuper.

He is currently a clarinet teacher in the Demos project of the Philharmonie of Paris and at Nina Simone Conservatory in Pontault Combault. He is also a member of the Venezuelan Clarinet Trio.