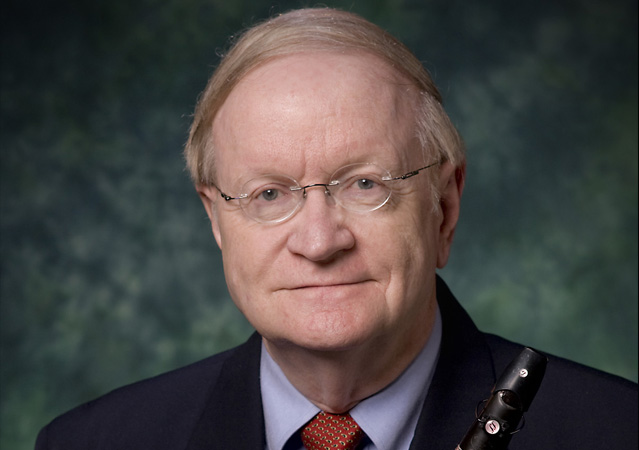 James Gillespie retired as Regents Professor of Music at the University of North Texas in Denton in 2011. Prior to joining the U. N. T. faculty in 1978, he served as a faculty member at Concord College, Indiana State University (adjunct), University of Redlands and Northeast Louisiana University (Monroe). In 2013 he was selected as Alumnus of the Year by his alma mater, Concord University (formerly Concord College). He holds the master’s and doctorate degrees in clarinet/woodwinds from Indiana University where he studied clarinet with Henry Gulick. He has also studied with Mitchell Lurie. His reference books on works for reed trio and solos for unaccompanied clarinet have become standard references in the field, and he has edited works for Musica Rara, Southern Music Company and Billaudot. For the past 35 years he has been the editor of The Clarinet, the quarterly journal of the International Clarinet Association. He has performed at clarinet conferences in Denver, Oberlin, Quebec, Cincinnati, Tempe, Columbus, Lubbock, Oklahoma, Fresno, Ostend, Stockholm, Changchun, Salt Lake City, Paris, Vancouver, Taiyuan (China), Beijing and Tokyo and has given master classes and solo and chamber music recitals in England, Scotland, Japan, Hong Kong, Hungary, Germany, Puerto Rico, China and Taiwan. Composers from France, England, Belgium and the United States have dedicated works to him, and he has premiered several new works for clarinet. In 1994, 1995, 1997 and 2008 he served on the jury for the Dos Hermanas International Clarinet Competition in Spain and on the jury for the International Clarinet Competition in Kortrijk, Belgium in 2010. During the summer of 1997 he performed at the I. C. A. ClarinetFest at Texas Tech, the Cracow Clarinet Festival in Cracow, Poland and the first-ever European Clarinet & Saxophone Conference in Budapest, Hungary. He performs as a member of the Texas Clarinet Consort. His former students hold positions in numerous colleges and universities throughout the United States and in major military bands in Washington, D.C. Several have been semi-finalists and prizewinners in the I.C.A. Young Artist Competition and on two occasions winners in the clarinet category of the Yamaha Young Performing Artist program. In 2005 he was honored by the International Clarinet Association with an Honorary Membership at the I.C.A. ClarinetFest® in Japan. He is an artist/clinician for Buffet Crampon and Rico International.